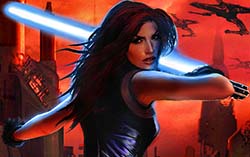 The Star Wars Expanded Universe has been revoked as I discussed on the blog last week, so this week on the podcast Martin and Owen are joined by Rob and Red Xavier from the friends in your head forums to sort the matter out. From Rebels to Mara Jade and the Thrawn Trilogy we argue over which EU is worth saving and what’s just a load of Darksaber!

Owen thinks it’s probably for the best to chuck it all in and start a fresh but then some people just want to watch the world burn. Where Martin has some nostalgia glee for the ninties run of novels from Bantum publishing.