Could This Be Why Klingons Look So Different In Star Trek: Discovery?

When we first started seeing images of the new Klingons on the set of Star Trek: Discovery there was a lot of speculation about their appearance. They were not in keeping with the original makeup developed for the motion picture series. Nor were they in the style recently seen in Star Trek Into Darkness

.
There have been several different iterations of the Klingon look. From the Original Series where they just look tanned and the recent Bad Robot productions where ridges were taken to a new extreme. From the movie series starting with 1979’s Star Trek The Motion Picture through Star Trek the Next Generation, Deep Space Nine, Voyager, and Enterprise. the forehead Cornish pasties were fairly consistent.

One of the first bits of information we heard about the new Star Trek series. The fact it had been somewhat influenced by the sixth movie “The Undiscovered Country”. This led to a lot of false reporting that Discovery would be set between the Original Series movies and the start of The Next Generation. which turned out to not be the case.

Last year Edward Gross released a book entitled the 50-year mission. which provides an oral history of the Star Trek franchise. The book covers everything from the very early development of the original series. Right through to the current movies. One of the people interviewed was Mark Rosenthal, Who co-wrote the first draft of Star Trek: The Undiscovered Country in the early 90s. In the book, they discuss several early ideas for the film which ended up not being used. Including this 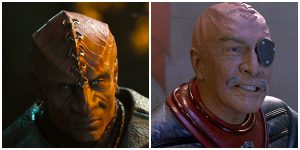 “we come upon more primitive Klingon tribes who had an almost religious representation for the Klingons. They would be much more primitive and violent. We were going to do a whole thing on the anthropology of the Klingons, but all of that was dropped because it would have been too expensive.”

Could this be the reason they look different in Star Trek: Discovery? The Klingons have such a completely new appearance. Are they are in fact members of some primitive tribe? I think it is likely that they will turn out to not be the usual Klingons. That we’ve encountered until now in the previous series. We’ll have to wait until September 24 to find out if they tie into the early draft of Star Trek six, however.